I found and got to the start and registration field in good timing, parked up next to the start, half way point and finish line packed the mandatory kit and registered. It was an absolute dream to have accommodation right on the start line, no need to be getting up at 3 am in the morning, ‘o’ no , it’s a lay in for me, a roll out of bed and onto the start line for me, I was so pleased at this I drank 3 of my 4 what was to be celebration beers…

3am in the morning I’m awoken with a banging noise every 15-20 minutes, competitors arriving using the portaloo in the field, seriously? Could they not see I’m trying to sleep lol…so much for my lay in. I tossed and turned till around 5am and got up to get sorted. Two portions of porridge and 2 fried eggs, and cuppa coffee.

So I join the pack at the back, I wasn’t going to be pulled into the testosterone fueled my bollocks or boobies are bigger than yours at the front, which happens at some events. I had made this mistake before. I was there on that day just to complete my first 100 miler not to look for a place or time just to finish within the cut off time.

I met Ged Longworth at around mile 2 who was running the 50 mile and so we ran chatting to the first checkpoint, where we parted. I continued to run at a comfortable pace, reminding myself often to slow down that I’ve a long way to go, but I just can’t stop myself sometimes, especially on the descents when my legs are feeling good I love letting loose on the downhill sections.

The trail was busy with other event’s, walkers and hikers, this didn’t bother me to much, we are all there to enjoy it but if im tearing down the side of a mountain trail flailing my arms like an emu trying to take flight and you are coming up, have the courtesy to move to the side, or dont look at me with shock if I narrowly brush past you.

I got myself into counting down the miles, rather than checkpoint to checkpoint I don’t normally do this as it’s a bit disheartening, telling yourself ” only 82 miles to go” counting down until you get to the last 10 miles but I felt I had to do this to put my mind in the 100 mile distance frame of mind, and it worked, I didn’t feel disheartened at all. My first loop went really well, I was enjoying the pace and my legs were feeling good. I promised myself a nice feed when I got half way, a tin of beef stew and tortilla wraps with the possibility of a wee 20 minute papa nap, this thought was the only thing on my mind from mile 40-50…

When I reached half way and was told I was in 2nd place my idea of a papa nap changed, I still had my feed, clean compression socks, base layer top and socks, packed the bag with more tailwind and pepperami’s and I was ready to get back out, I left in 7th place. as I passed the 50 mile runner’s on the way back out respect and support was given both ways, it really is a great community, ultra running, there is a lot of respect there for every runner. As I headed up toward Gordale Scar I was following the route on my watch, I stupidly made the mistake of not paying attention to the correct the second loop route, I was supposed to go by the burger van to Gordale Scar not back up the same trail I came down, it was 1.5 miles until a clued up 100 mile runner coming in from his first loop gave me the head’s up. “Aaaaaarrrrrrrggggggghhhh” was one of the things that went through my head along with a lot of sentences with fuck in it… I was grateful to the runner for telling me but so angry with myself, 3 mile off track round trip , roughly 35 minutes added on. I got back to the turn off and stop beating myself up, told myself I could still be in top 10.

This was the point that my mind-set changed from just finishing in the cut off to finishing in a time and place, top 10 was the best I would have ever done so I imagine how I would feel crossing the line in top 10 and I used that feeling along with one other, fear, to run the next 50 miles. The fear feeling came in after cp 7, there was a runner close behind me and I didn’t know at that point what position I was actually in so imagined I was in 10th and I didn’t want to lose that spot.

I pushed on at a slightly faster than comfortable pace, keeping an eye on the runner behind I could see I was making some headway on the climbs so pushed up PYG, and back down to cp8. When I got there I was told I was in 6th place which I was over the moon with, then something happened that I haven’t done before in an ultra, I became competitive. I mean competitive for a place, I’m always competitive with myself in all the race’s I do, pushing myself that little bit more to beat the challenge I set in my head. I could see a head torch ascending Whernside and started to focus on top 5…

I set off from cp8 knowing that cp9 was a long 16-17 mile two peaks away, I’d Fueled up well enough and off I went, headphones were on at this point and I hiked to the beat of the music, (which was trance music, so it was quite a fast beat.) As I hiked up Whernside the headtorch in front got closer then it appeared to be two headtorch’s. I peaked Whernside threw on my jacket and as I started the descent bumped directly into those two headrorches, unfortunately one of the two runner’s was struggling with his quads, they had blown and refused to work. I offered my help in any way but they had it covered, so I carried on.

Before the climb to Ingleborough I managed to catch up and pass another runner, the adrenaline and joy took hold of me at this point as I realised I was in 3rd position. I used that to motivate me up Ingleborough the last major climb, as I climbed happy and content in 3rd place I could see a head torch topping out.

I pushed on up and down Ingleborough to cp9, 86 miles. I had stopped thinking about the mileage up till that point Fueled more by the tailwind, chia charge and adrenaline. At cp9 I met another runner, we set off roughly the same time heading 4 miles to cp10, we got lost a little then I managed to pass him on the short climb and reached cp10 in 2nd place. I had just 10 miles to go, 10 miles to keep moving, 10 miles until I was going to experience a feeling I had never felt before, 10 miles to keep ahead of the runner behind. I used the fear of being chased again to keep me moving. Quads were hurting, ankles were worse by this point but the thoughts of my first ever podium kept the pain at bay.

I came into the final straight along the riverside, I could see the finish and an overwhelming feeling of achievement rushed over me, it’s that feeling that keeps me doing these runs and pushing for bigger and better, not going to lie its a bit of an addiction now, I love pushing myself to the limits doing things that only few have done, it may be my downfall one day but if it is I will have fell doing somthing that makes me happy and gives me joy. I became awful emotional by the riverside, thinking about the above the tears started to trickled down my sweaty cheeks, I had done it, I had completed my first 100 mile race. I let the tears run with me for a bit along that riverside pathway as I crossed the river and into the showground where the tears left me, waving me on across the finish as I approached a new feeling of happiness and higher sense of achievement than I have ever felt.

As I crossed the line I was congratulated in 2nd place. I had been enjoying this new feeling so much that I never noticed my wife was there until she threw her arms around me. She had left at midnight and made the 4 hour trip to surprise me and surprised I was, it was great to have her there to share this brand new experience with me. 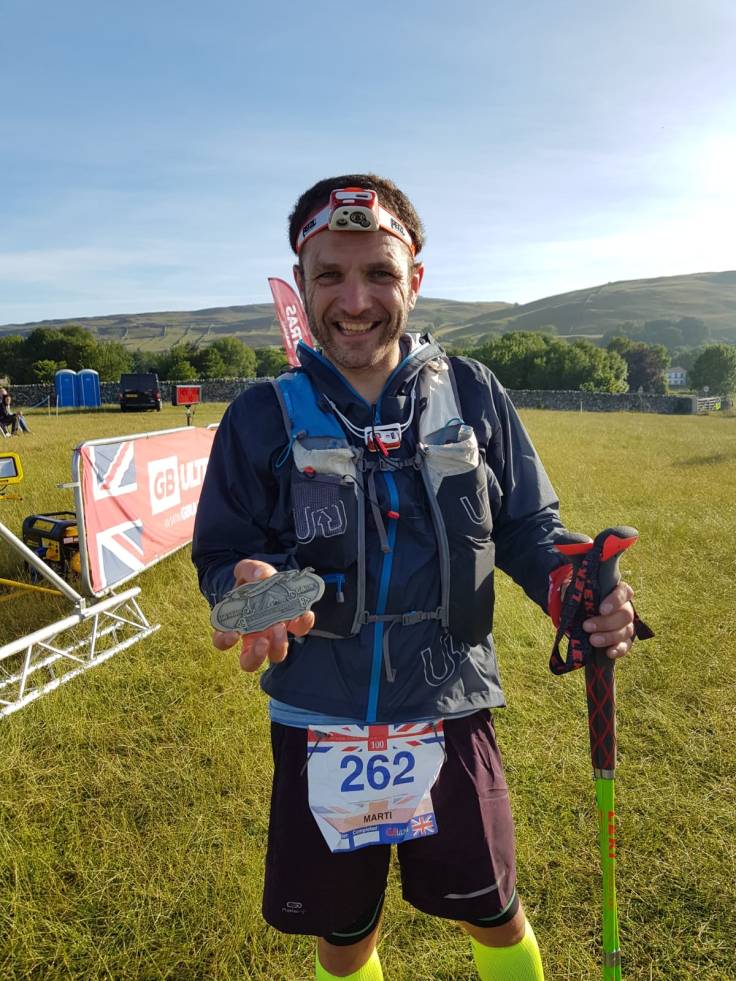 A fantastic event with lovely friendly, encouraging volunteers and supporters with a great bunch of runners. Well done everyone who finished. I have recovered well and 5 days on as I write this in Spain I feel ready to take on the 65km Buff Epic Trail in the Pyrenees.

Thank you for reading.